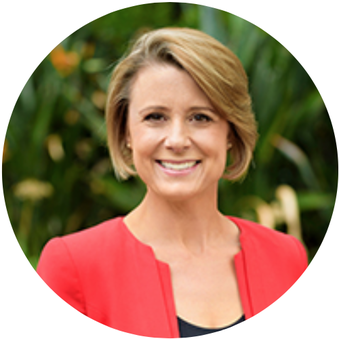 The Hon Kristina Keneally is a Political Commentator at Sky News and co-anchors To the Point on Sky News Live.

She has had a long standing career in politics and is widely known as the first woman to hold office as the 42nd Premier of New South Wales, a position she held from 2009-2011.

After politics Kristina was the CEO of Basketball Australia between 2012-2014.

Kristina is the Director of Gender Inclusion/Adjunct Professor at the Macquarie Graduate School of Management and a regular columnist.  She also serves as a Chairman of Souths Cares, a Board Member of the United States Studies Centre, Patron of the Stillbirth Foundation Australia and Ambassador for Opportunity Australia International. She is also a member of the Referendum Council to advise on the constitutional recognition of indigenous Australians.

Kristina holds a Bachelor of Arts (Honours) in Political Science and an MA in Religious Studies both from the University of Dayton.
​
Kristina is married to Ben and the mother of three children.  In her spare time she watches her sons play basketball and takes her labrador on long walks.